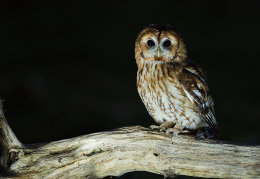 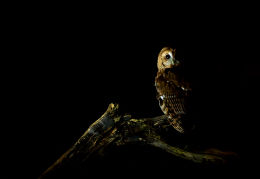 I positioned around four of these lights on the ground directing their dim glow towards the perch and found it was enough to be able to lower the ISO to around 3200, still very high but at least I was getting somewhere. Over the next month or so I visited a couple of times a week and usually left with one image I could use. I still wasn't happy though, the owl was coming in later and later and staying at the perch for less time and would always infuriatingly pick up the mouse and turn away from me before flying off so I never got a chance of the iconic shot I so wanted with the owl looking at me with a mouse in it's mouth. It was around this time also that rats had discovered the free mice on offer, how it had took them so long I don't know but something needed to be done.
Rats can comfortably jump around three feet and climb almost anything so I raised the perch of the ground by means of smooth metal poles. I also decided to take the plunge and invest in some old Vivitar off camera flash guns which provided they are used off camera wouldn't fry the D800's electronics. I had decided that in using flash I would adopt the same principal as before.....one shot per night only and only once or twice a week at most. In addition I would position the flash guns around 30 to 40 feet from the perch and in such a way that the owl wouldn't be looking directly at the flash and never ever fire them as the owl was flying. If the owl came back after having flash fired then I would continue, if it didn't then I would stop.........simple as that.
So two flash guns were mounted on ball heads on top of fishing rod rest poles along with a Yongnuo receiver transmitter/receiver on each. The camera was located outside the hide this time facing the direction the owl always looked towards before flying off and I sat in the hide with a remote trigger in hand and waited.
That I'm afraid and rather abruptly is where this particular story is paused for now as over the next month the owl never made another visit whilst I was there. The mice were still being taken but they could have been by the Jays at first light the next day or even by the buzzards still.

I have many theories and unanswered questions as to why the Owls have stopped visiting, it certainly isn't the flash set up as it was never fired in anger but here are a few of my thoughts and if anybody has any of their own then please do get in touch................

1) Something has happened to the owls - imo unlikely and there was definitely a pair so for them both to have succumbed?

2) What I was witnessing was the male courting the female and taking easy mice to present to her?

3) Food was harder to come by in the Winter, now it's Spring and they don't need dead mice?

4) It wasn't the male that was coming in but the female and as it is now the breeding season she could be on eggs or have very young chicks to feed?

5) If they have chicks then do owls prefer to give them live food?

6) I never saw the owls again after I raised the perch off the ground, do they prefer to take prey on the ground?

7) Although the flash guns were never fired, they do emit a very faint high pitched noise when in standby, could that have put them off?

8) They saw me dismantling the flash equipment each night before I left and associated those flash guns with something to be wary of whenever I was in the hide?

So many questions and so few answers. Another amazing experience though at this wood which I have been privileged to study and photograph as it slowly reveals some of it's many hiden secrets but I think until early Summer I will concentrate on other photography projects after which time I will return for another attempt.