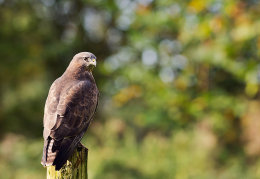 23/02/2014
An update to my first blog on the kestrels is..no sooner had I finished writing it than a visit to the farm the following day revealed the kestrels to be both back in the same tree as the previous year which is great news! I will leave them be for a month or so or at least until they have chicks for fear of them abandoning the nest tree. Until that time I shall just get them used to my comings and goings and that they have nothing to fear from me.

Anyway back to the main subject of this blog..........In August last year I finally bought a pop up hide and set about finding a suitable location in the wood to set both it and a feeding station up. One location shouted out more than any other and it was a grassy clearing about around 100 yards in diameter but sheltered on all sides by trees. The hide was erected along one edge and a basic feeding station set up to see what species would be attracted to it. My initial intention was to photograph mainly the small birds which I have done on and off though out the last 6 months (blue tits, great tits, robins, thrushes, nuthatches, greenfinches, great spotted woodpeckers all frequent visitors) but it was the haunting calls of the buzzards which I knew had nested in the wood that year that really grabbed my interest and I wondered could I, given time entice them down?. So from another farm I found a couple of wooden fence posts and put them up about 20 yards from the hide and started leaving out mice bought from pets at home two at a time. They were white lab mice, not very natural looking so not ideal especially if I did find myself in a position to take some photographs but at the time I didn't have access to brown mice or rabbits and not a larger enough freezer or tolerant enough wife to contemplate storing roadkill. Time went by and although the mice were disappearing regularly I did not see the culprit. It could have been magpies, jays, crows, fox, buzzards, kestrels or..........tawney's (more of that in my next blog). There was only thing for it..... I needed a trail night camera. A good friend of mine lent me hers but despite it being triggered on numerous occasions there was never anything on the card apart from an empty screen or shots of me arriving or leaving.

This was getting so frustrating, then one afternoon in September when I had turned up to refill the bird feeders, I entered the clearing and a buzzard took off from one of the posts I had erected! A result, sort of but it gave me the impetus to carry on and not give up anyway. The farmer who periodically allows shooters onto his land to keep the pigeon and rabbit population under control let me have a rabbit that had been shot so I left that out. Over the next couple of days the rabbit was gradually consumed until only a few bones remained. It was clear to me now that the buzzards were the culprit, a fox would have carried his bounty off in one go for sure.

More trips to pets at home followed and then one morning in the hide, the birds at the feeding station all alarm called and disappeared as a buzzard dropped in from behind me and landed on my post.......my heart skipped a beat, to be that close to a beautiful wild buzzard who was totally unaware of my presence was a special moment. The temptation to start firing the shutter was tremendous but I knew I had to give him/her (no way of telling as far as I know) time to settle as when they first land they are very very wary. As he tucked into his second mouse I set my camera to single shot and quiet mode and fired off a couple of shots. He looked up but was not overly perturbed and carried on eating. Finally after weeks of speculation and failure I had my first images.

Over the course of the next couple of weeks I would leave mice out irregularly every two or three days and gradually they came down more regularly and were less wary, allowing me to take my camera off single and off quiet mode. 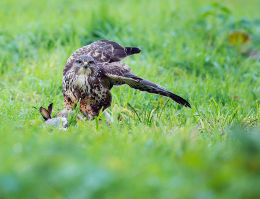 I needed my shots to be more natural looking though......eventually I managed to find a source of rifle shot rabbits. An important note here is that if you have the patience and are inspired to try luring buzzards for yourself and you use rabbits that aren't road kill then they MUST be rifle shot and not killed by a shotgun. If you do the latter then there is a huge risk that the buzzard could ingest the lead and poison it!.

Pretty soon they were confident enough to leave the sanctuary of the posts and feed on the ground, often spending 15 minutes or more before flying off into a nearby tree to digest their meal.

I hadn't given up on feeding mice though (by now I had managed to source more natural looking brown mice) because with rabbits the buzzard comes down, eats his fill and flies off. With mice scattered on the ground, the buzzard lands on the post, flies down to a mouse and invariably flies back to the comfort of his post to eat it allowing for more opportunity of flight shots.

It was on one of these occasions that having arrived long before sunrise, I found the previous days mice had been untouched so I had to leave another 4 mice out (having already been defrosted I couldn't refreeze them) leaving a total of 8. I took up position in my hide and waited for the sun to come up, 4 hours later and nothing. Puzzled and disappointed I packed up and walked out of the hide........all the mice, all 8 of them had gone!. I had been sat for 5 hours in the hide without a hope of a picture and whatever had taken the mice had done so whilst it was still dark and without me seeing or hearing a thing. I had my suspicions but that was for another day.

I'm pretty sure at the start that the buzzards were unaware of my presence but as time went by they seen me leave for sure. This is unavoidable unless you are prepared to arrive in the dark and leave in the dark, which in the winter is still 9 hours in a cold, damp hide. Even for me that's pushing it somewhat so my tips for anyone attempting photographing buzzards in this way are:-

1) Location, location, location - this is paramount, if your chosen location is likely to be frequented by walkers, runners, cyclists, dogs....forget it, the buzzards will never feel confident for long enough to come down and feed.

2) Don't give up, if there are buzzards nearby and the location is secluded enough, they will come.

4) Arrive at your location at least an hour before sunrise

5) If using rabbits, then only use roadkill or rifle shot ones

6) Use single shot and quiet mode if your camera has one, at least early on

8) Keep still and make no noise what so ever, even if there are no buzzards in sight it doesn't mean they are not watching. Buzzards will often perch up in a tree for hours before being sure it is safe.

9) If successful, keep your location secret, the last thing you or the birds need is a load of togs turning up and ruining your hard work in one go or even worse someone who wishes harm to the bird (yes even today these people unfortunately still exist)

10) Do not jeopardise the welfare of the bird, if you feel what you are doing is risking the birds safety or upsetting it's natural behaviour then stop. If you do this in the colder months using a buzzards natural food and outside of the breading season then I see no harm and are merely giving the birds a helping hand when food is much scarcer although there are people who will disagree.