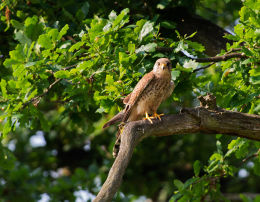 10/02/2014
It all started about 8 months ago.............I'd been looking for a safe woodland site to put up a mobile hide with the aim of photographing bird and animal life. Not an easy task living in the heavily populated Midlands, my last hide lasted 3 days before it was stolen! Anyway a chance conversation with a work colleague put me in contact with a local farmer who had some mature woodland on his land and was more than happy (if a little bemused by my intentions) to let me set up a feeding station and a hide etc. I honestly had no idea what I would discover along the way and that made it all the more exciting.

So I made my first recce back in mid June and decided that the best location for a feeding station would be a clearing near the edge of the woodland although the over zealous resident midge population discouraged me from setting it up for a month or two and with a Scotland trip looming my focus was elsewhere anyway.
On the way back to my car one evening, an isolated oak tree close to the woods edge caught my eye, it had a potential nest cavity on it's trunk and more promising was the white poop covering some of the bark at the entrance to the hole. So I decided to return the following day to stake out and see if it was indeed occupied. The following evening I drove down to the edge of the woodland and parked up about 60 yards from the tree and waited, and waited. An hour went by and I could just make out movement inside the cavity and see what looked like down covered chicks but no visits from any parents in that time. By now the sun was low in the sky and I was beginning to think owls but then I heard the shrill call of a male kestrel delivering food close by, seconds later the female flew into the nest cavity with a field vole.....what a result!, I'd never managed to find a kestrel nest in the past but to have one out in the relative open where I could use my car as a hide was more than I could have hoped for. Over the next week or two I made visits most evenings after work, every time maintaining a discrete distance from the nest and ensuring the car windows were all heavily screed up with camouflage to stop any unwanted reflections or movement of me inside. The importance of doing this when photographing from a car cannot be overstated enough, a lesson I learned from Paul Riddle (he of 'Owls about that then' fame) whilst photographing little owls. Birds aren't stupid, they will always know you or at least something is there no matter what you do but by doing everything you can to reduce your visibility to them and stop them seeing any movement will really help you get closer and also prevent any undue stress to whatever birds or animals you are watching.
I was treated to views right inside the nest cavity where I could make out the fluffy forms of three well developed chicks. The routine was nearly always the same.........I never got to see the male (one of the pitfalls of having the tunnel vision that a camouflaged car or hide gives you), I heard him often enough when he would return close by calling the female whereby she would take off from her nearby lookout point on another tree to relieve him of his freshly killed vole and would then take it into the nest to tear up and feed to the well fed but ravenous chicks. 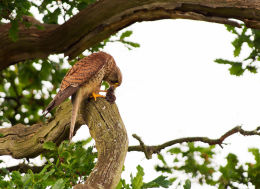 Although they shared the hunting between them, it was always the female who would take the food into the nest and feed the chicks, whether that is normal Kestrel behaviour I don't know. On one occasion the female was keeping watch from a nearby tree whilst the male was off hunting when she swooped down onto a vole not twenty feet from my car................ I was not expecting it so missed any chance of a photo, neither do I think was she but it just goes to prove what opportunistic creatures they are not turning down an easy meal especially if it's right under their talons. Although I missed the picture on that occasion it was nice to see that she was confident and relaxed in my presence enough to land so close to the car.
The Scotland photography trip I mentioned earlier was upon me and for the first time ever in my life I was actually reluctant to go and possibly miss the chicks fledging but go I did and was as I always am glad that I did in the end.
On return from Scotland I was back up the farm the very next day but it was clear I had indeed missed the fledging. All three had made it though! and they spent the next couple of weeks still being fed by the parents but slowly venturing further and further from their birth place until one day in the middle of July they were gone for good. Both parents also seemed to leave this area around the same time, perhaps to more suitable hunting territories but hopefully they will be back later this year to raise another family.